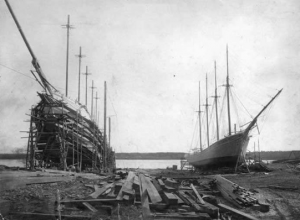 Named for the son of the owner of the Palmer Fleet of Boston, the five-masted schooner Davis Palmer  struck Finn’s Ledge, just west of The Graves, in a terrible gale on the day after Christmas, 1909.

After striking the ledge, the Davis Palmer  drifted into Broad Sound and sank. All 14 members of the crew perished.

The schooner was built at the Percy & Small Shipyard in Bath, Maine, in 1905, under the supervision of Master Shipbuilder Myles M. Merry.

Ship owner William F. Palmer was a Boston man, a naval architect and entrepreneur who built 14 colossal five-masted schooners – all of which were lost.

The sinkings earned the Palmer Fleet the nickname “Unlucky Fleet.” 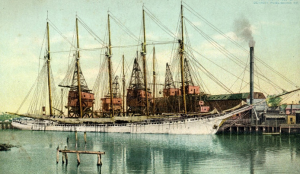 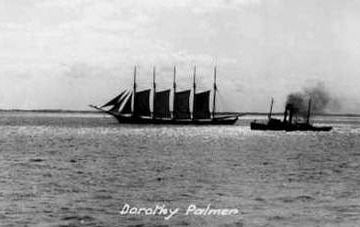 Wreckhunter.net reports that the most of the wreckage of the Davis Palmer  was removed during a Broad Sound Channel dredging operation in 1912.

See more details about the Davis Palmer  at Wrecksite.eu.