During a heavy snowstorm on March 9-10, 1860, the 250-ton brig Ewan Crerar  struck Graves Ledge. The vessel anchored a short distance away as the crew tried to save the ship, but the Ewan Crerar  sank within 45 minutes. No lives were lost. 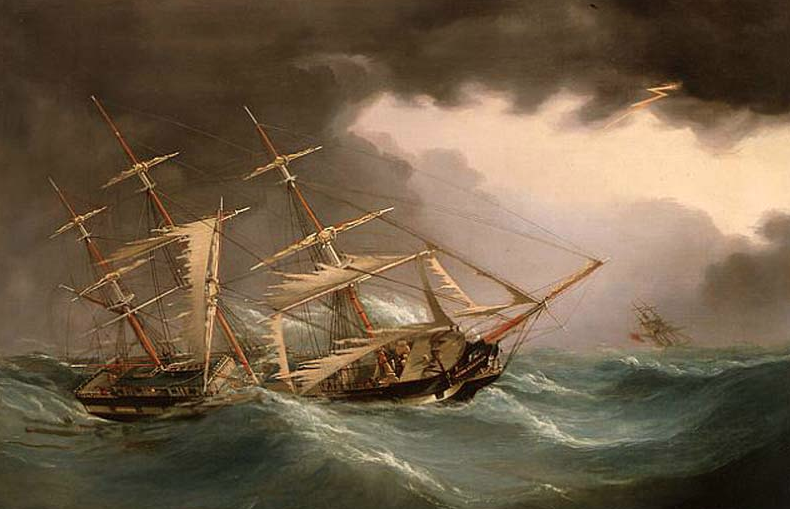 “The pilot disclosed that he reached the bell buoy near the Graves and kept off, supposing he could clear the ledge. Because of a miscalculation or wind change, the vessel struck, became unmanageable, and was forced to anchor between Egg Rock and outer Brewster Island. She sank forty-five minutes later in seven fathoms, with only a few feet of her mainmast and topsail yard out of water. The rigging, sails, and spars were stripped from the brig. The crew abandoned ship, but were not in immediate danger.”

Divers salvaged much of the cargo.

The Ewan Crerar  was built at the shipyard of James Kitchin, of River John, Nova Scotia, and launched in the spring of 1858.

They named the brig (also listed as a brigantine) after a relative, Captain Ewan Crerar, who went down with the barque Lord Ashburton  on the Grand Manan Island, New Brunswick, in a winter storm the year before. (See Joseph Heard’s painting of the Lord Ashburton, above.)

The Ewan Crerar  was registered in Pictou. Nova Scotia was a British colony at the time, so the brig’s nationality is listed as British.