Less than an hour after leaving the Boston Fish Pier for George’s Fishing Bank off Cape Cod, the crew of the 170-ton trawler Lynn  sat down for an early evening dinner. It was just after 5:00 p.m. on November 29, 1951.

Suddenly, the 10,500-ton tanker Ventura  struck the Lynn  from behind and plunged the fishing boat under its colossal flaring bow.

The 13 men sitting at dinner didn’t have a chance, and perished as their trawler heeled over and sank.

Thrown from the wheelhouse into the frigid waters were four members of the crew, including the helmsman, 46 year-old John J. King of Winthrop, and Lynn‘s captain, James C. McNamara, age 41, of Medford.

All four were rescued by the fishing boat M. C. Ballard, which rushed them to the Boston fish pier to waiting ambulances.

However, the other two, Mate Jim Hayes and crewman John Rogers who had come up to invite McNamara to join them for dinner, died on the way. 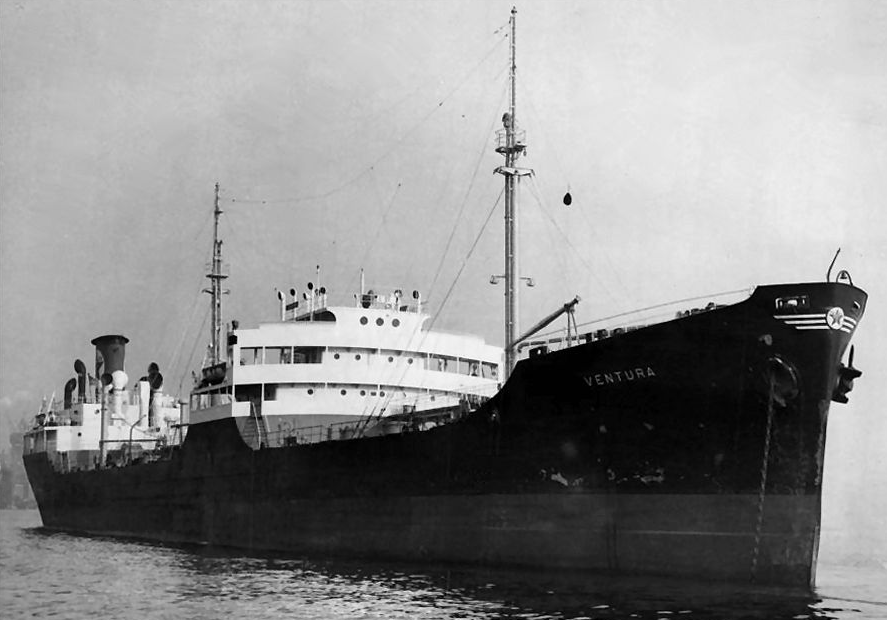 The Ventura,  having delivered its cargo of fuel at the Union Oil dock in Chelsea, had just passed the Ballard  at a speed of 13 to 14 knots. At the scene of the accident, the tanker reversed its engines, radioed for help and stood by to render assistance.

Why the Ventura  struck the Lynn  in Broad Channel is unclear. The sun had just set behind Boston, leaving calm seas. “The Coast Guard said the weather was clear at the time of the accident which occurred between Graves Head and Finn’s Ledge about 5:15 p.m.,” according to United Press.

Lynn‘s running and deck lights were properly operating, and Ventura‘s skipper and crew had each other’s vessels in sight. The tanker even whistled and rang bells to tell Lynn  that it was overtaking the trawler, but the fishing crew couldn’t hear. Then Ventura  struck a rear davit on the smaller boat, causing the wreck.

A legal case later established the circumstances in a detailed report.

The 102-foot Lynn  was a Boston boat; the Ventura, a T-2 tanker (hull # 73) built for World War II service at 504 feet in length, was registered in Wilmington, Delaware, and owned by the Ventura Steamship Corp., apparently a subsidiary of The Texas Company (Texaco).

Months later, the wreck of the Lynn  was located and raised to the surface under what Edward Rowe Snow called “dramatic conditions.”

The collision occurred not far from where, just a decade before, 18 fishermen drowned aboard the Mary E. O’Hara  in Boston Harbor’s worst maritime disaster.

Though an admiralty court found Ventura  solely responsible for the disaster, Texaco appealed the case, which dragged on for years. After Texaco lost its legal appeals in 1955, the Ventura  was renamed Tuscarora  with ownership transferred to another apparent shell company called the Tuscarora Corp., and re-flagged in Monrovia, Liberia, West Africa. It was renamed World Tempest  in 1956. In 1965 it was sold to an Italian ship breaking company for scrap.