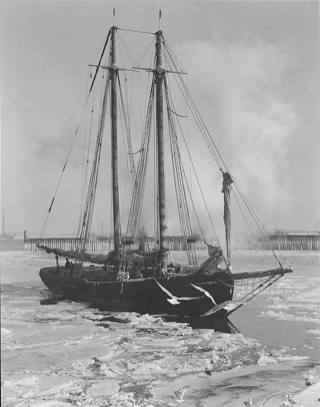 Eighteen men perished in the wreck of the Mary E. O’Hara  on a frozen night in early 1941.

In a blinding snowstorm, the wooden fishing schooner collided with a steel sea-going coal barge off Graves Ledge.

Press reports at the time called it the most tragic disaster in Boston Harbor’s history.

The lost men fell from the rigging and spars after freezing in the 12-degree weather, or were trapped in their bunks as the vessel went down.

Crewman Clayton Hines of Melrose, bleeding from the scalp upon being thrown from his bunk, raced in his underclothes to warn his shipmates that they were sinking. “For God’s sake, get out of here, men!” he shouted. “We’ve struck something.”

“Our ship was torn apart and she filled up so fast that a lot of fellows didn’t have a chance to get above decks,” said survivor Gabriel Welsh of East Boston. “All who did, ran for the masts and started to climb. Those who chose the foremast were out of luck, because it was soon under water and they went down. Some of the fellows who were with us in the mainmast couldn’t hang on because of the cold. 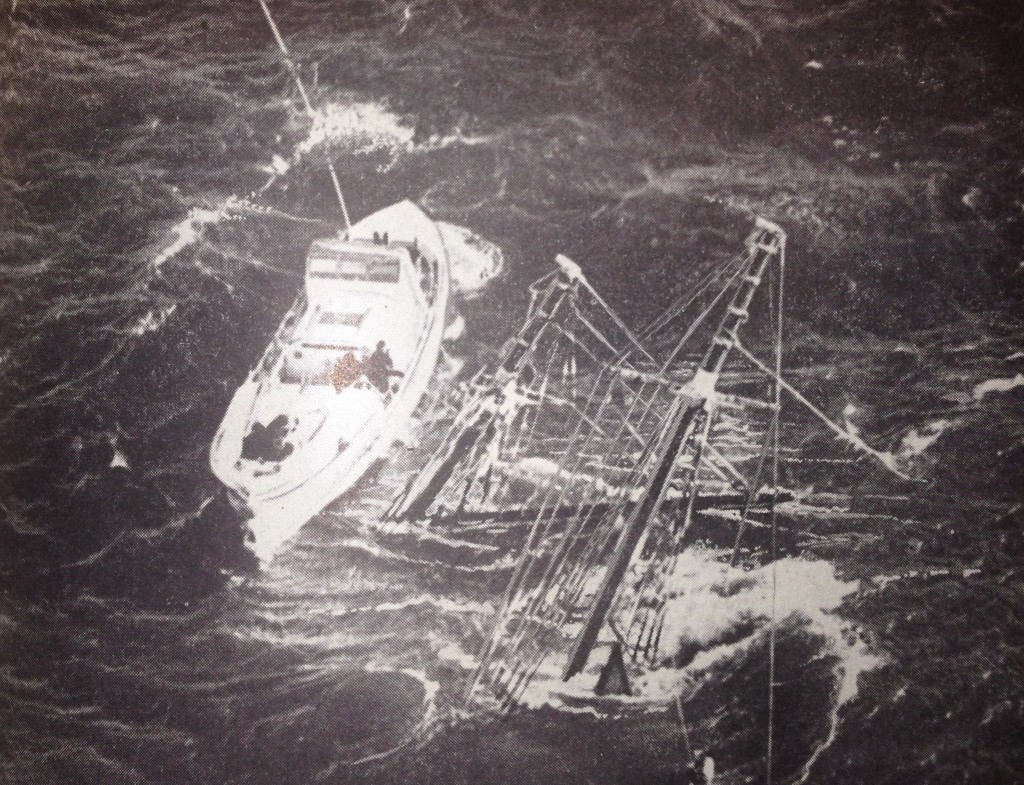 “They dropped off one by one, yelling and praying,” Welsh said. “We were all yelling as loud as we could.” Hines didn’t make it.

The five surviving crewmen watched helplessly for nearly three hours as three other ships passed by, but could neither see nor hear them.

Finally, Captain Lars Lunde of the trawler North Star  heard the faint cries of the men and maneuvered his vessel into the O’Hara‘s mainmast. About 12 feet of the mainmast and 5 feet of the foremast protruded out of the water, with the five survivors clinging for their lives.

North Star  crew reportedly had to climb into the O’Hara‘s  rigging to remove an exhausted and frozen Nova Scotia crewman.

“Eighteen fishermen were drowned today, almost within sight of their homes, as the Boston schooner Mary E. O’Hara, homeward bound from a week on the fishing banks, was split open on a collis

ion as it approached Boston Harbor and sank,” the Associated Press reported on January 21, 1941.

The news account continued: “Five half-frozen survivors, dragged from the protruding mainmast of the sunken schooner by the crew of the trawler North Star, told their rescuers that the O’Hara  apparently struck a barge and that the rest of the crew of twenty-three fell from the rigging, one by one, as their hands froze.”

The schooner sank so quickly that there was no time to launch any of the 10 dories aboard, the survivors said. Sheets of thick ice froze the dories to the decks, which slipped under water as crewmen feverishly hacked the ice with axes before escaping up the masts. Captain Fred Wilson stayed with his axe until the freezing water reached his waist.

A separate 1941 news account, republished by DownToSea.com, describes the heroism of the fishermen in their last minutes of life: “Captain Fred Wilson of the Mary E. O’Hara, with his vessel sinking fast, attempted to run his ice-encased vessel for nearby Finn’s Ledge and those on deck who succeeded in getting out of the cabins climbed the two masts. A majority had neither coats or hats or mittens. As their hands and arms began to freeze they wrapped the frozen members around the rigging. They chorused prayers, said farewells to their mates dropping from the icy rigging and yelled for aid.”

Captain Wilson was the last to fall from the mast into the sea.

Another account said that the keeper of Graves Light watched in horror, unable to render assistance for lack of a rescue boat. 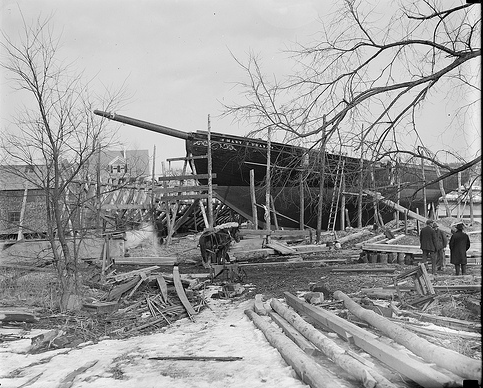 Wreckage and bodies washed up near Graves Light.

“Soon after noon, a Coast Guard plane radioed headquarters that ‘several bodies,’ four dories and a considerable amount of wreckage was washed up on the outermost island of the Brewster group, near Graves Light,” AP reported.

“The cutter Algonquia  was rushed to the spot under forced draft.”

The men of the Mary E. O’Hara  were just minutes from the end of their fishing journey when their vessel stuck the barge, which was being towed from Virginia to Maine with a load of coal.

Despite the predawn bad weather, the O’Hara‘s alert helmsman, Gilbert Smith, saw the anchored barge in time to take evasive action. Two and possibly three other anchored barges were in the way.

But as the heavily laden, ice-covered fishing boat swerved, it struck the 130-foot steel barge and immediately took on water. Captain Wilson had tried to save her by heading for the shallows of Finn’s Ledge, but his schooner was on the bottom in fewer than five minutes.

Each lost fisherman left his own tragic family story.

Chief Boatswain John Sheehan of Gloucester was the first survivor to see the North Star  approach. He shouted to his men, “Hang on, a boat is coming.”

“Hang on, yourself,” Welsh called back. “I’m sure we’ll be rescued.” But when the trawler was close enough to save the men, Sheehan lost his grip. Welsh recalled, “when I looked again Johnny was gone.”

Sixty year-old crewman Mandea [or Monte] Leblanc of East Boston was to have retired and gone back to his family after the O’Hara  was scheduled to dock at the Boston fish pier, according to the report. He had been at sea since age 13.

The barge that wrecked the O’Hara, a coal barge called Winifred Sheridan, sank after the collision. Press reports following the incident said that the barge remained afloat, but the Coast Guard later placed a buoy to warn other ships of the navigation hazard. The wreck is now a dive site.

According to press reports of the time, the O’Hara‘s five survivors were:

Note: For a Hines (Hynes) family account of the disaster, full of details (some of which differ with the accounts above) see MugUp, a newsletter of the Gloucester schooner Adventure, Spring 2009.

The restored Adventure, which like Graves Light is a National Historic Landmark, is similar to the Mary E. O’Hara (but without a bowsprit) and was built in 1926 in Essex, Mass.