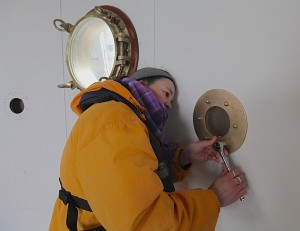 Lynn sets a cleaned and restored component of the original USLHS ventilation system.

We started springtime restoration at Graves this year by wrapping up our last winter project, which was to install the original brass vent covers in the watch room.

The heavy cast covers had been lost for decades, but we found them last year, and now they’re back in place.

Lynn is shown at work on one of the vents.

These vents allowed fresh air to flow through a specially designed duct (to prevent rain and seawater from entering) and up into the lantern above where five burners produced the illuminating flame.

In the gallery below, Dave is standing on the snow-covered watch deck, holding one of the original vent covers about to be returned to its space.

Another picture shows the vent cover back in place, flanked by two portholes. We added the portholes, from a steamship that sailed at the time Graves Light was built, to provide light and ventilation in the formerly windowless watch room. 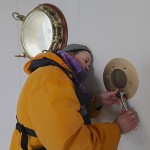 Lynn removes the non-original brass vent cover so that the restored originals can be installed. 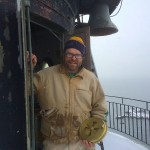 Standing outside the watch room, on the snow-covered watch deck, Dave holds one of the original brass vent covers before its re-installation. 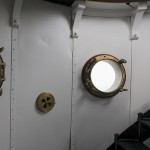 Restored to its original location, the USLHS vent cover is now flanked in brighter surrounds by two vintage steamship portholes.