The sea has swept away all but four of the original massive stones. For years, divers have searched the bottom of the harbor around Graves Ledge and never found any of them.

So we rebuilt the wharf with 2-1/2 ton granite blocks recycled from an old New Hampshire railroad bridge. It was a complicated job.

With ACK Marine, we set three courses of granite blocks extending below most of the elevated wooden dock and a bit further into the harbor.

Guiding the blocks into place with precision required calm seas and a dead low tide. ACK set the first of the three courses of granite in a day.

The blocks were set in place in wet concrete with large holes bored through them.

To slow the inevitable destruction by the sea, the blocks were doubly held into place with massive steel pins that run through holes drilled through the entire thickness of each block and down into the ledge itself. Each pin was attached to the stone beneath the sea with high-tech, environmentally friendly epoxy.

ACK Marine then installed the wooden forms and poured a massive concrete slab behind the blocks to try and prevent heavy winter storms from knocking the whole thing to pieces.

Never know until you try!

Extra thanks to Mike S from King Pine for the helicopter photos and Michael B for the breathtaking overhead picture.

We get a lot of questions about how much of a pounding this or that modification or reconstruction will take from the sea.

A lot of engineers and others helped us think things through before we drew up the plans and went to work.

This diagram shows the load calculations on the Oil House, with its new second story.

We built a new timberframe roof to replace the old, and added stainless steel reinforcements which the original roof didn’t have.

The precast marine concrete walls of the second floor are heavily reinforced and interlock with one another. They are bolted six feet into the ledge below.

Nearby pilings for the footbridge are made from 6-inch reinforced stainless steel pipe, welded to the original US Army Corps of Engineers steel pilings that were drilled six feet into the ledge. The original ones worked perfectly for decades until a big storm snapped them off like twigs.

The windows will be protected from hurricanes by anti-ballistic shutters.

That’s the plan, of course. The sea will decide for herself what works.

This is the big year for the Oil House restoration. We needed a decorative element to transition from the old stone blocks to the modern 2nd story.

Swenson Granite Works, a family business since 1883, cut a beautiful belt course of solid stone around the top of the original first story, to form a granite base of the new second level.

The fellows from Atlantic Restoration teamed up with King Pine Restorations to form a super-team to tackle the impossible.

Sixteen stones, each weighing 700 pounds, were hauled out in the Miss Cuddy I. She’s former Coast Guard Defender vessel that had been the shuttle to Graves Light until rough waters last year dragged her mooring and wrecked her on the ledge. Her USCG-designed hull came out intact, so we pulled off the cabin and turned her into a barge.

After hauling each block to Graves Ledge on the Miss Cuddy I, we used an old-school derrick to hoist the granite 25 feet up the ledge, and then pinned the blocks into place.

This was no small job: these guys built the Zakim Bridge and it was rough going for 3 weeks.

A tip of the cap, Mike, Jason, Chris and Rob!

Well, it seems you’re never really “done” fixing up a lighthouse, but we’re well enough along where we thought it fun to share some Before and After photos.

Those of you who have followed us from the start might recall how big a task we had in front of us.

For perspective, the interior of Graves Light is about 13 feet in diameter.

The “Before” shots were taken in the autumn of 2013, right after we purchased Graves Light from the Coast Guard. The “After” shots are how things look today. 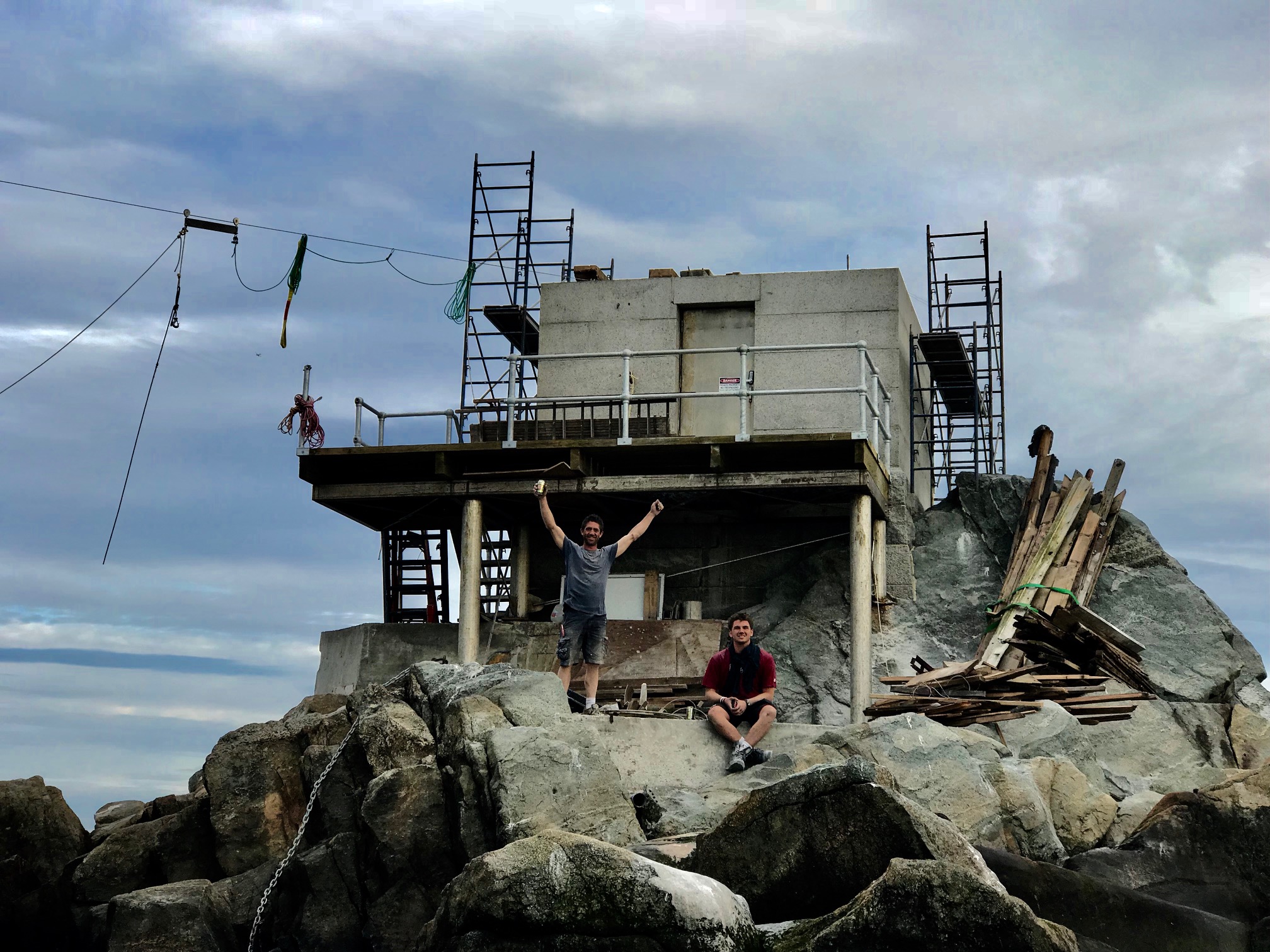 This summer we begin to seriously tackle the old Oil House. That’s the 10 x 10-foot-square granite house on the ledge next to Graves Light. We started building the new timber frame roof in the spring at a workshop in Maine.

We’re converting the Oil House into a guest cottage. The old postcard to the right shows how the Oil House used to look, connected by a steel landing across a small channel to Graves.

Inside, Gary, Logan and Mike drill six feet down into the ledge, pinning the original granite blocks in place to fortify them for the next hundred years.

Outside, Nelson Metal Fab completes the landing and handrails in the same style as the original landing that was washed away in the “No Name” storm of 1991.

The rotten remains of the old roof are gone. They are seen bundled up to the right of the Oil House. You’ll see something new soon.

We do not plan to rent out the guest house. There’s lots of interest, but it just isn’t feasible. 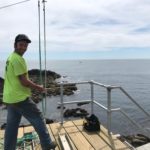 Building a steel landing to replace the original. 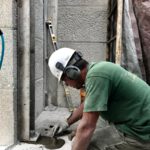 Adding steel reinforcements to the concrete and stone. 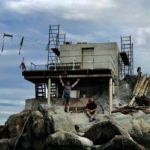 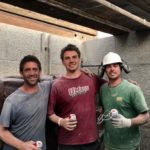 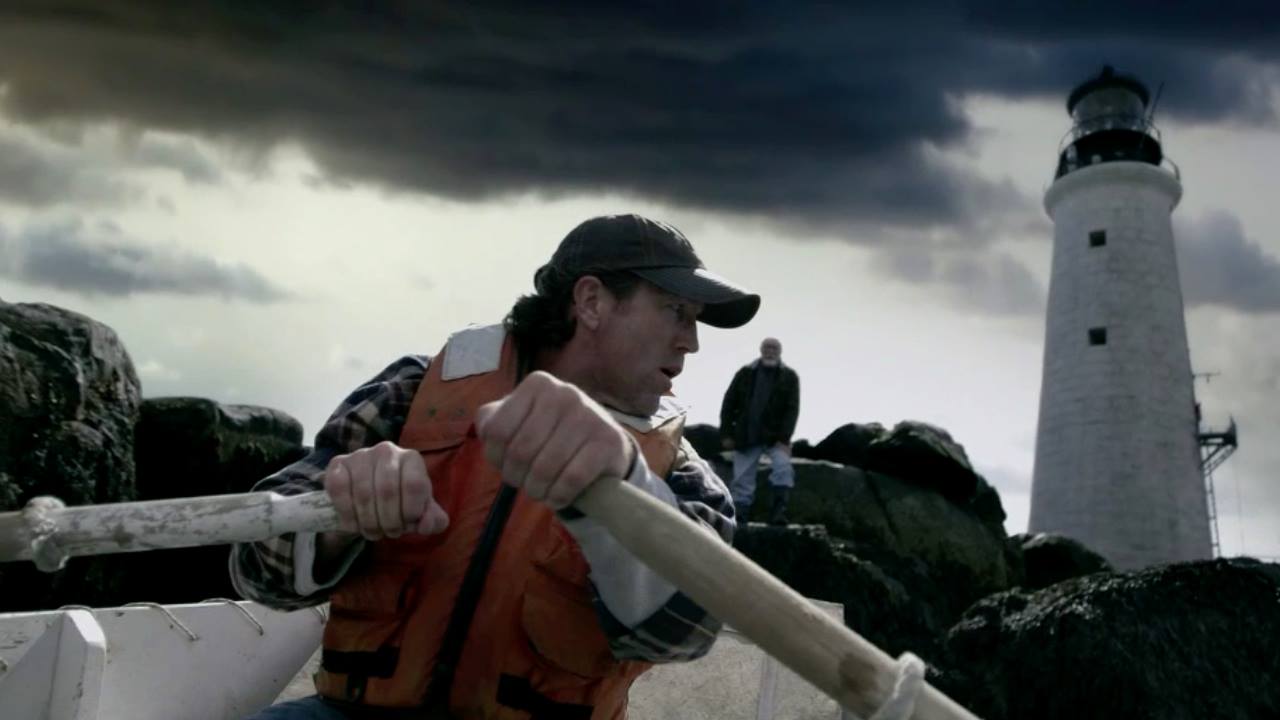 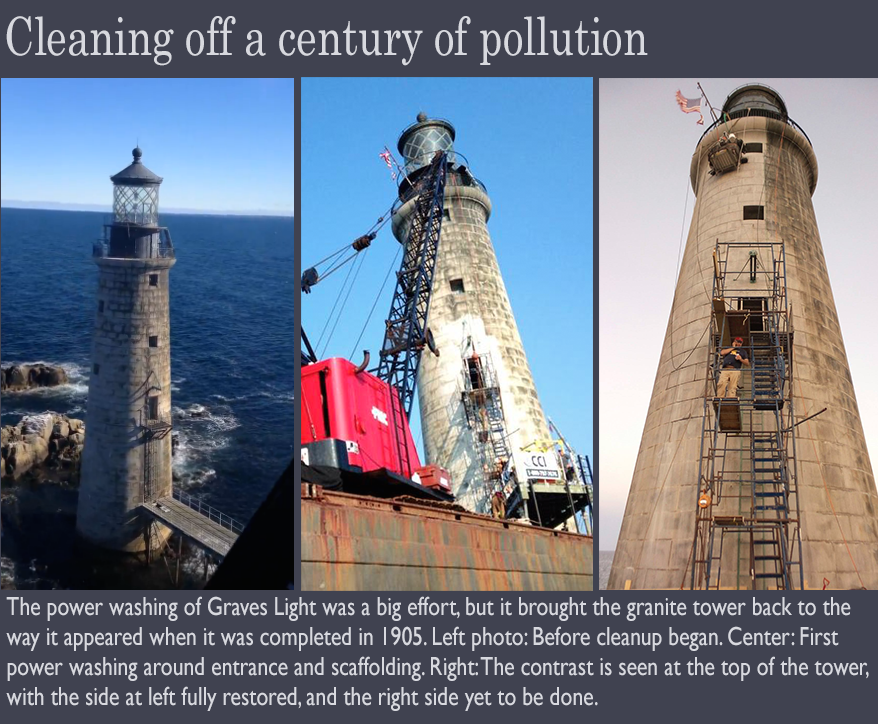 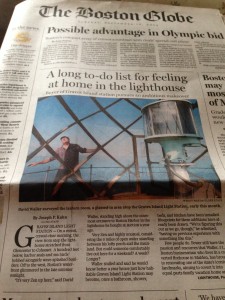 Good news on the front page of the Boston Globe.

Joe Kahn of the Boston Globe wrote an engaging feature about Graves Light, one year after Dave and Lynn purchased it from the federal government.

In a page-one, above-the-fold story datelined Graves Island Light Station, the Globe laid out what it called “A long to-do list for feeling at home in the lighthouse.”

“We’re figuring this out as we go, though,” Dave says in the Globe, “having no previous experience with something like this.”

“Few people do,” the Globe comments. “Fewer still have the passion and resources that Waller, 51, a Boston businessman who lives in a converted firehouse in Malden, has brought to renovating one of the state’s iconic landmarks, aiming to covert it into equal parts family vacation home and historic preservation project.”

The online version includes a gallery of pictures by Globe photographer Wendy Maeda, and a video. 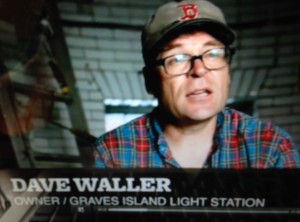 Keeper Dave explains in the Boston Globe video the progress to date and future plans.

While the Globe focused on Keeper Dave as the main character, it laid out the bigger picture of family members, contractors, volunteers, local officials, and well-wishers who are making the revival of Graves Light possible.

“Waller says his biggest surprise has not been the extent of the repair work, or the price tag attached,” the Globe reports.

“‘It’s been the outpouring of positive energy from the community — and willingness for contractors to actually come out and work on this,’ he said, grinning. ‘I thought people might say, “Hell, I’m not working out there on this rusty old lighthouse.” But they haven’t.'”

The Globe asked Dave what a lot of people have been asking: Will there be any public access to the lighthouse in the future, and might people have a chance to rent it out as a B&B?

“Yes and yes, says Waller. For now, anyone attempting to land on the rocky outcropping is trespassing and warned to stay clear. Once access is improved, though, open houses should become more feasible. Short-term rentals, too. ‘Because it’s something worth sharing,’ he said, bounding between floors. ‘People are curious.'” 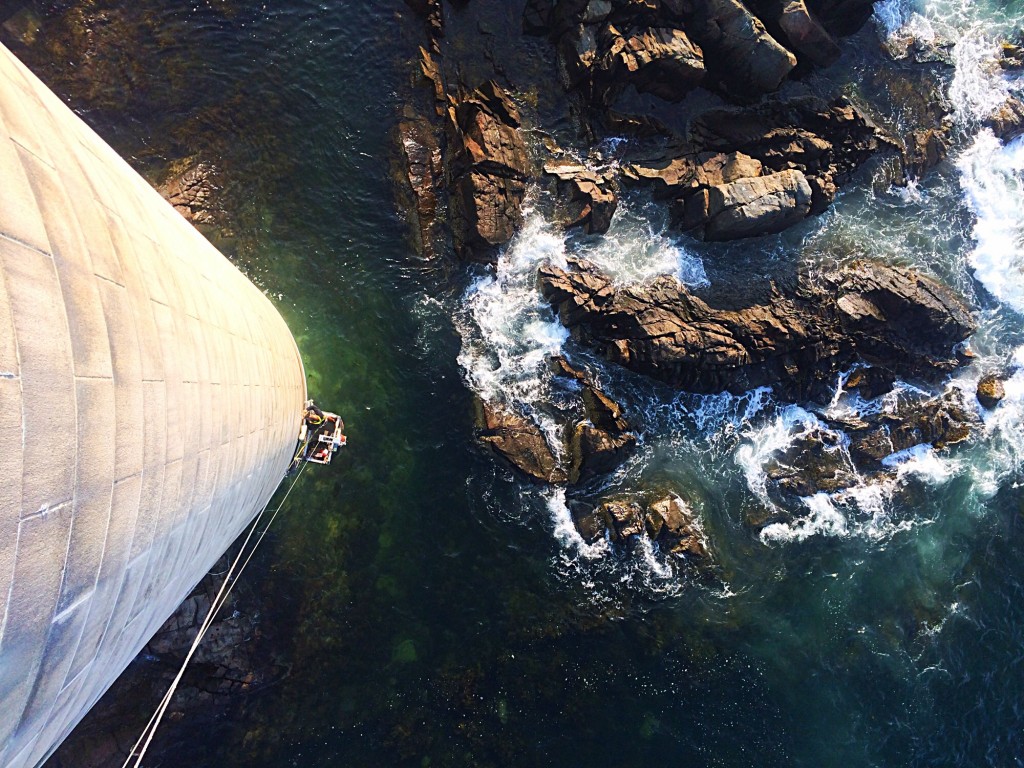 Mike Sylvester of CCI Construction hangs by ropes to reinforce stone blocks at the base of Graves Light.

We started the stabilization and restoration of weathered stone at the base of Graves Light,  using modern techniques to revive the original.

In this picture, Mike Sylvester of CCI Construction is suspended 80 feet as he works to reinforce blocks of stone fragmented by a century of tidal action.

Mike’s drilling holes in the damaged stone, inserting epoxy and stainless steel bolts to reinforce the blocks, then covering the holes with grout.

We made the grout with crushed granite from the very same Rockport quarry that provided the original stone to build Graves Light in 1903.